Missing Background Image in the UI Group 2 Section. Please make sure the file is exist in your system. 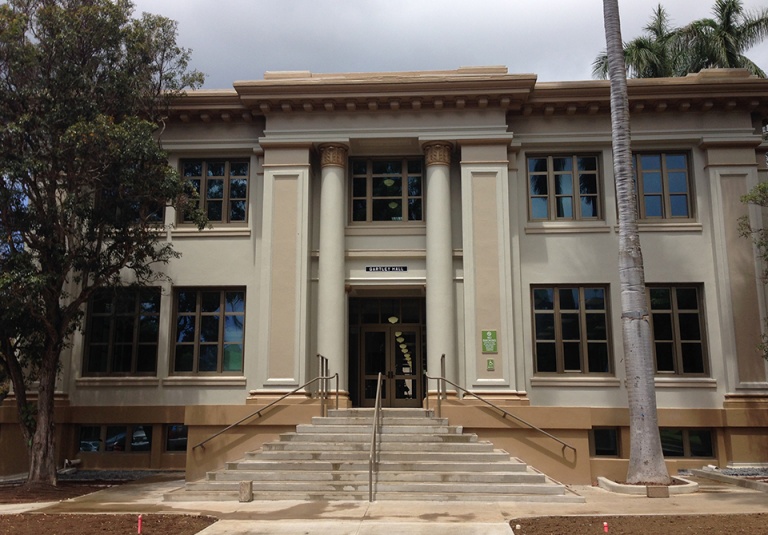 Gartley Hall is part of the Old Quadrangle listed on the Hawai'i Register of Historic Places.   The Old Quadrangle is part of the original layout of the University and the buildings surround the quad (except for the School of Architecture Building) are among the oldest buildings on campus.  As such, Gartley Hall renovation must take care to follow the Secretary of Interior Standards for Rehabilitation and historic issues will be intertwined within the body of the Basis of Design and not taken as a separate design issue.  In 2008 settlement problems and column/footing deterioration was discovered during the design phase for the Psychology Department.  An assessment was done to determine appropriate structural treatment of the building and it was determined that the structural deterioration of the footings and columns was too great to safely support the building.   The building was condemned and was vacant since late 2008.

As part of the design team, Nagamine Okawa Engineers worked with the architect to structurally retrofit and renovate this historic structure for the current needs and requirements of the University of Hawaii.  The interior structure of the building was removed and the exterior walls were "underpinned" to mitigate settlement.  New concrete foundations including pile caps and grade beams supported by micropiles were installed to support the renovated building and prevent future settlement.   The interior of the building was then constructed out of structural steel with concrete floor slabs.